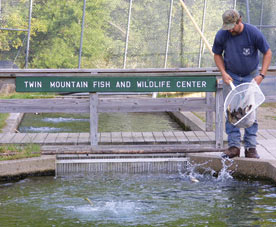 Fish & Game, to learn about some energy efficiency projects he has overseen in some of the state’s six fish hatcheries. If you aren’t familiar with hatcheries, they are places where artificial breeding, hatching, and rearing through the early stages of the fish’s life occur. Once the fish reach the length of about 10 inches, they are loaded into tanks that are affixed to flatbed trucks and released into NH’s many waterways.  NH Fish & Game raises the fish for two reasons:

Raising the fish is no easy feat. They require lots of 24/7 TLC and many resources, including a fair amount of energy. “In 2013, we installed a Variable Speed Drive at the Milford Hatchery,” said Smith. “We connected it to a water pump that pushes water from one of our wells into a pipeline that feed our hatchery and rearing tanks. Think of the Variable Drive as a giant dimmer switch,” he said. “It can be manually slowed down (decreases the amps) to reduce the flow of water at times when the full flow is not necessary, which saves energy.” A consistent water flow is essential for the health of the Rainbow, Brook and Brown Trout grown at Milford Hatchery.”

Another benefit other than the efficiency feature of the Variable Drive is its three phase power. Three-phase power provides three alternating currents, which means the total amount of power supplied by all three alternating currents remains constant. “The VSD has the ability to tell us what the electrical input is to each electrical phase. If one leg of the tree phase is out of balance, it may provide us with an early warning sign if we have a well pump that is failing,” said Smith

In addition to installing this device, the hatcheries have benefitted from other energy efficiency projects such as upgrading aged lighting systems to LED.  “Some of the hatcheries didn’t have any functioning lights at all in some areas,” said Smith. “Those that did had lighting that throws harmful UV rays.” Trout eggs react poorly to UV light, in fact once exposed many do not survive. “They had black garbage bags hung up across the racks of fish eggs,” said Chris Moore, Project Manager at the State Energy Office. “They were trying to protect the eggs from the UV exposure anyway they could. LED lighting does not emit significant UV radiation, so this project will reduce energy expenses and fish loss.” Moore oversees funds that have been designated to help agencies with energy efficiency projects.

There are additional benefits of the use of LED lights according to Smith. “The better LED lighting helps us be proactive instead of reactive,” he said. “You can see and observe the fish much better. You can immediately see if the tank is clean, or if the fish are eating as they should. The color of the fish changes when they are getting sick – we can now see when that begins to happen and take action more quickly – saving more of them.”

One Reply to “No More Fishing in the Dark” 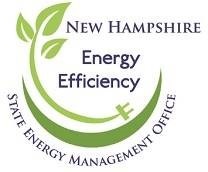 Visit our page on the nh.gov official site.